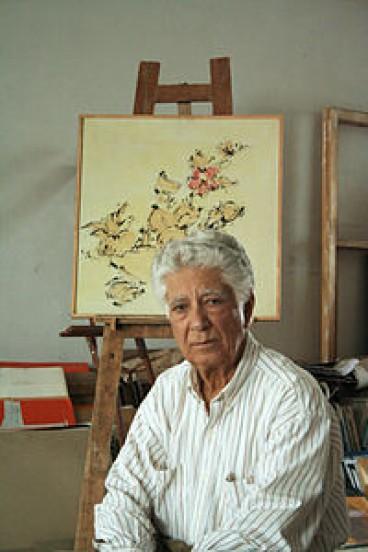 Expression through the language of texture in visual arts, engaged western artists in the early 20th century; it is perhaps a kind of emphasis as like as playing a solo in an orchestra. For creating a new texture, applying tick layers of paint with a palette knife or a trowel, as did Riopelle and Staël, is no more satisfying.

Much earlier, Picasso and Braque used sand on their canvas; they glued wallpaper as well onto the canvas for creating soft patterned textures; later on, Kurt Schwitters used any kind of materials in his paintings; however Max Ernst proceeded much further.

Ali Faramarzi, the Iranian painter and drawer, has a unique texture language. In his figurative paintings he looks outward and in geometric forms he looks inward; he manages the compositions with positive and negative textured surfaces and we see this consummate competence in his peculiar drawings. His figurative forms are tender and delicate, while the abstract ones are solemn.

Faramarzi is in search of more capacities of texture, unprecedented in works of other painters. He is traversing a path not taken before.