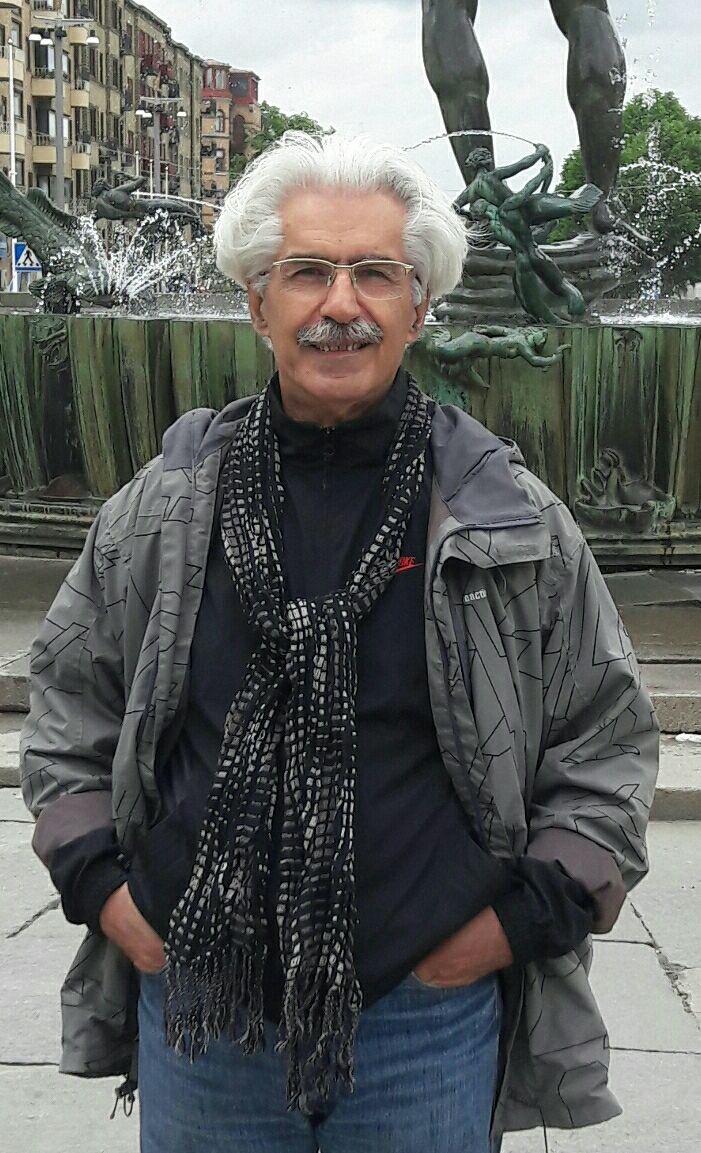 Ali Faramarzi was born in 1951 in the old neighborhood of Imamzadeh Yahya in Tehran.

Faramarzi went to primary school in the same old neighborhood.

He had not yet finished the ninth grade when he went to Jafar Petgar's painting class.

Familiarity with the new artistic environment opened a window of hope for him and he decided to become a painter.

But most of all, he has learned from his experiences shaped his way of painting, and made him a self-taught painter.

He learned from the Impressionists that objects change shape in different lights.

He learned from Cézanne that nature can be abbreviated into geometric shapes.

The Symbolists showed him the power of mental distortions, learning the architectural composition by Picasso.

At all times, he wants to approach the emotional content and the truth hidden behind the appearance of the forms and elements of nature and humans and to show the same truth.

In design, while combining, he also simplifies and summarizes. He tries to show only the basic elements, free from marginalization’s and depicts the visual equations

of a brief and abstract nature.

Ali Faramarzi's schemes if he breathed them in one breath and they have an architectural quality and they are seen in the same way.

He started his special training classes in 1974 and in 1976 he received a scholarship as a  young artist in Niavaran Palace. He held his first group exhibition in 1977.

Two years later, in 1979, he received a letter of appreciation from the Museum of Contemporary Art in Tehran.

he won a scholarship to the Academy of Rome that year but was unable to use it due to the outbreak of war. And then he opened his official school with a license.

His second group exhibition was held in 1980 at the Museum of Contemporary Art in Tehran.

His specialization in teaching visual arts led him to start teaching students at the Iran-Italy Cultural Association in 1984.

He also opened his gallery in 1986 under the name of "Faramarzi Gallery". In 1988, he was able to hold his solo exhibition at the Museum of Contemporary Art in

Tehran, and after that, he participated in the third group exhibition in the same place.

In 1997, he was elected as a member of the board of directors of the Iranian Painters Association.

He has also been selected as a member of the organizing committee and an art expert by Iran Galleries for the 2004 Expo.

In 2007, he started teaching for a master's degree at the Sooreh University of Tehran.

In 2007 he was known as an honorable professor of the Sooreh University in Tehran that made his academic passion more clear.

In 2008, he held his workshop for the third time in the Museum of Contemporary Tehran.

So far, he has held 26 solo exhibitions in Iran and other countries such as the United States, Italy, Qatar, Dubai, Singapore, Pakistan, South Korea, China, etc.

Seyhoun Gallery and M Gallery in LA and San Francisco.

There is no doubt that his works are at a level of artistic value that has been sold in the Tehran auction (2015-2016) in three periods.

In 2017, a book called Ali Faramarzi's Notes (Visual Arts in Written Media) was published by him. Also in 2020, a selected book of his works has been published.

He is one of the leading critics of contemporary Iranian painting, writing or lecturing on the visual arts in particular. He has published more than 250 articles on

visual arts in Iran in some of the major newspapers and magazines.

1969 - His first lesson in art at the private classes

1976 - Winning the Scholarship of the young artist

1979 - Workshop at the Tehran Museum of Contemporary Art

1980 - Group exhibition in the Tehran Museum of Contemporary Art

1982 - Establishing his own classes for visual art in Tehran

2007 -Professor of the Sooreh University

2007 - Becoming an honorable   professor of the Sooreh University in Tehran

2008 - His last workshop at the Tehran Museum of Contemporary Art

2012- Lectures and workshops at the Stanford University

2012 - Certificate of Appreciation from Stanford University

2012 -Solo exhibition at the Seyhoun Gallery in LA

2012- Solo exhibition at the M Gallery in California

Culture and Islamic Guidance under the title of Deserts.

2018 -Solo exhibition at the Niavaran Cultural

2020- Publication of a selected book of works by Ali Faramarzi

some of which are briefly mentioned below.